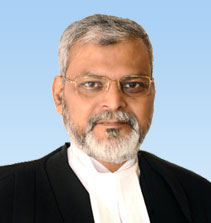 Completed M.Com. from Delhi University in 1984.

From March, 1988 joined profession and started practice in Bolangir District Courts under the guidance of his father, Shri Markanda Mishra.

Secured the 1st position in the Recruitment Examination for District Judges from Bar and on 16.2.1999 joined as Additional District & Sessions Judge, Jeypore.