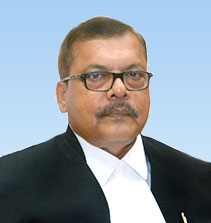 Graduated from B.J.B. College, Bhubaneswar with Arts (Hons.) in the year 1979.

Obtained Master Degree in Political Science from Delhi University in the year 1981.

Enrolled as an Advocate in year 1986.

Appointed as Standing Counsel from March 1994 to October 1994 in Odisha Administrative Tribunal, Bhubaneswar and Government Advocate in-charge from October 1994 to June 1995.

Appointed as Additional Standing Counsel in Orissa High Court from 2000 to 2006.

Appointed as Additional Government Advocate in Orissa High Court from 2006 to 2009.

On being transferred he took oath as an Additional Judge in the High Court of Jharkhand on 22.12.2014.