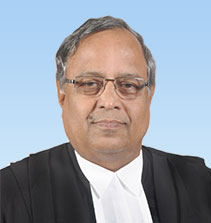 Hon'ble Dr. Justice B.R. Sarangi hails from a respectable family of village Pantikhari Shasan, Odagaon in the district of Nayagarh.

He is the youngest son of Late Banchhanidhi Sarangi, Ex-Financial Advisor belonging to Senior Class-I of Orissa Finance Service cadre of State of Odisha and Late Smt.Sailabala Sarangi, a doting house-wife.

Married to Mrs. Nirupama Sarangi, an out and out housewife turned as an advocate of the Orissa High Court. Blessed with two daughters, Dr. Debarchita, an MDS final year student, and Debasmita, a student of M.S. Law College, Cuttack after completion of Post Graduation in Economics under Utkal University, Vani Vihar, Bhubaneswar being topper in the State in +2 Arts CHSE Exam, 2012. Dr. Justice Sarangi passed H.S.C. Examination and acquired degree in Commerce with Hons. from B.J.B. College, Bhubaneswar. Acquired LL.B. & LL.M. from M.S. Law College Cuttack under Utkal University. Awarded Ph. D in Law from Sambalpur University.

He joined the Bar in December, 1985 having regular practice in the High Court of Orissa, Cuttack and Supreme Court of India, New Delhi and also a life member of Orissa High Court Bar Association.

Most significant career move as a lawyer began with systematic and meticulous training in the chamber of esteemed Late Sri Gangadhar Rath, Former Senior Advocate-cum-Advocate General of Odisha in almost all the branches of law.

For outstanding performance and etiquettes in profession conferred the "Haricharan Mukherjee Memorial Award" with Gold Medal for the year 2002 from the then Hon'ble Chief Justice of Orissa High Court. He completed a long 27 years of practice at the Bar.

He was elevated to the Bench of Orissa High Court as permanent Judge on 20th June, 2013.