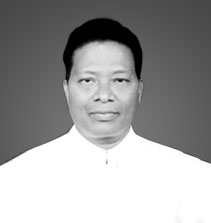 Born in a small village ‘Subai’ in 1942. After completing his primary education from his native village as well as from Gumada, joined the Board High School, Gunupur where from he passed Matriculation in 1962. Passed his B.A. with Honours in Economics from Shri Krushna Chandra Gajapati College in 1966. He did his Post Graduation in Economics from Ravenshaw College in 1968 & Law from Madhu Sudan law College, Cuttack in 1969. Embraced legal profession in December, 1973. After practising as an Advocate for some time at Paralakhemundi Shri Papanna shifted his practice to Gunupur, his native place, where he earned his name and fame as an Advocate mostly representing for the poorer sections such as Adivasis, Harijans and other weaker sections of the society.