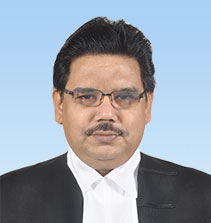 Passed Matriculation in the year 1978 from Panchayata Samiti High School, Ullunda in the District of Sonepur.

Graduated from B.J.B. College, Bhubaneswar with Political Science (Hons) in the year 1982.

Graduated in Law from Madhu Sudan Law College, Cuttack in the year, 1985.

Obtained Degree of LL.M. as a Non-collegiate candidate in Utkal University on Constitutional Law as Special Paper.

Enrolled as an Advocate in 1986 and joined the office of Hon'ble Shri Justice A.S. Naidu as a junior.

Appointed as Additional Standing Counsel in the year 1992 and continued till the end of 1994.

Joined the service in the Cadre of Orissa Superior Judicial Service (Senior Branch) as a Direct Recruit on 16.02.1999.