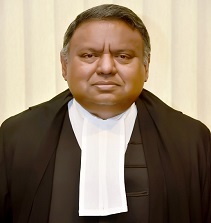 Born on 11th November, 1960 at Cuttack in the State of Orissa to late Ranjit Mahanty, Barrister at Law and advocate Smt. Shakuntala Mahanty.

Enrolled as an advocate with Orissa State Council in 1984, and began legal practice under his father late Br. Ranjit Mahanty till his demise in the year 1989. Thereafter started independent practice in the field of Commercial Law, Arbitration, Taxation, Civil and Criminal, Writs & Service Law before the Civil Court, Orissa High Court and the Supreme Court of India, as well as, conducted few arbitration proceedings at London.

Elected to the Orissa State Bar Council of India from 1989 to 2006 and elected to represent Orissa State in the Bar council of India between 1998 to 2003. Elected as the Managing Trustee of Bar Council of India Trust in the year 2003. Member of Board of Governors, National Law School of India University (Bangalore) from 2000 to 2003, and NALSAR (Hyderabad) from 2000 to 2002, Mount Hermon School, Darjeeling between 1997 and 1999 and Larence School (Lovedale) Ooty from 2002 till 2006. Life member of Orissa High Court Bar Association as well as member of the Supreme Court Bar Association.