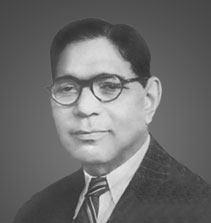 Born on 21st October 1891. Was the undisputed leader of the Orissa Bar for more than fifteen years. He was graduated from Ravenshaw College and obtained Law degree from the Calcutta University. He became the first Advocate General of the new Orissa in 1937 and then elevated to the Bench of the Patna High Court in 1945. He was the President of the Orissa High Court Committee appointed by the Parlakhemidi Ministry in 1943.