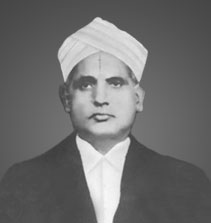 Born on 27th July, 1893 Berhampur, Ganjam and had his early education in Berhampur. He passed Intermediate examination from the Khalikote College in the First Division in 1909 and joined Madras Presidency College and got First Class in Mathematics in his B.A.(Honours) examination. He is a M.L. of the Madras Law College and is a gold medalist of the Madras University in Hindu Law. He stood first in his M.L. examination in the Presidency Law College and joined Madras Bar in 1917 and had his apprenticeship under Justice Ramesam. He was a practising advocate of Madras for nearly 30 years.

In 1921 he joined the Congress, took an active part in 1932 to 1934 Congress Movement. He was very intimately connected with various organizations of the Indian National Congress and of late Mahatma Gandhi such as Gandhi Seva Sangh, Harijan Seba Sangh, Hindi Prachar Sabha etc. He was a councilor of the Madras Corporation.

He was called to the Bar at Madras 1918 Practiced in Appellate side till 1948 with a break of 2 years during which interned in connection with 1942 Congress Movement; Member, Bar Council Madras 1943-48.